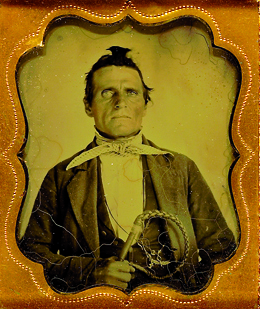 The man identified only as “Abraham, Slave Master” holds a whip clenched tightly in his fist. This is an “occupational” portrait, one where the sitter poses with an object symbolic of his profession. Abraham was probably a slave overseer, or perhaps a slave trader, not a more refined and aristocratic owner of a large and old-family plantation. But the whip is symbolic of more than the job of slave driver: it embodies the fear, the punishment, the pain, the violence that was necessary to enforce slavery’s structure of domination. 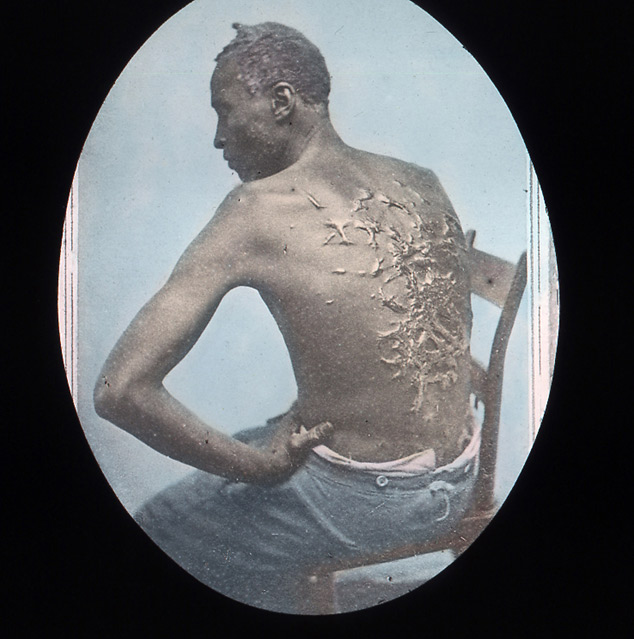 Gordon was the victim of a whip such as the one held by Abraham in the previous slide. When Gordon (the only name we have for him) escaped from a master in Mississippi, he made his way to the Union Army lines in Baton Rouge, Louisiana in April, 1863. The condition of his back was was discovered by an army surgeon when Gordon underwent a medical examination to enter the Union Army, which he did. So shocking was Gordon’s condition that this portrait was made; it became widely distributed in the United States and abroad and was the subject of a story in Harper’s Weekly. 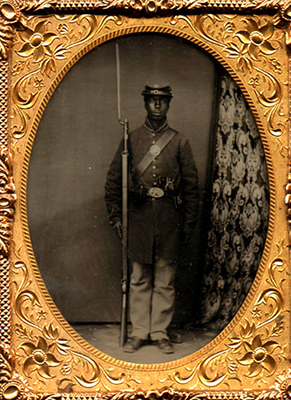 This young man is a new recruit in the famous 54th Massachusetts Volunteer Infantry. Starting in 1863, nearly 200,000 free African Americans, as well as those who escaped from slavery during the war, served in the Union Army and fought in the Civil War. Abolitionists such as Frederick Douglass argued for allowing them into the army: “Once let the black man get upon his person the brass letters US, let him get an eagle on his button, and a musket on his shoulder, and bullets in his pocket, and there is no power on earth or under the earth which can deny that he has earned the right of citizenship in the United States.” 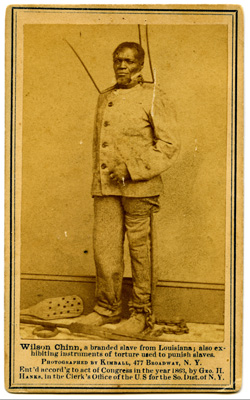 Wilson Chinn, who escaped from slavery during the Civil War, poses here with the instruments of bondage and punishment used on slaves, both to restrain their movement and to terrify them. Chinn participated in a series of such photographs in part to help educate people about the violence involved in the system of slavery. As one of the measures of control employed on Chinn, his former master branded him with the initials VBM, for Volsey B. Marmillion, a sugar planter in the New Orleans area. More images from series of former slaves may be seen on the Mirror of Race website in the special exhibition entitled “Slaves in Black and White.” 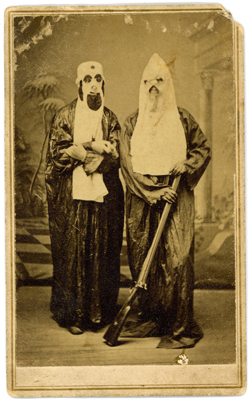 On the night of Oct. 31, 1868, approximately 150 armed men in Ku Klux Klan regalia rode into Huntsville, Alabama to break up a meeting of the Republican Party and to terrorize the Blacks of the city, who had been free since the Emancipation Proclamation and the Union victory in the Civil War. The KKK shot and killed a judge and two African American men. That night, Federal troops captured three of the KKK men and confiscated their robes. In this photo, Federal soldiers wear the robes and show the confiscated weapons to record the practices of the KKK. The jailers in Huntsville simply let go the three captives, who rearmed, took back their horses by force, and left town. For an account of the Huntsville raid and other KKK activity, see the <a href=”http://archive.org/stream/reportofjointcom00alab/reportofjointcom00alab_djvu.txt“ target=” _blank”=””>1868 report</a> of the Joint Committee on Outrages. 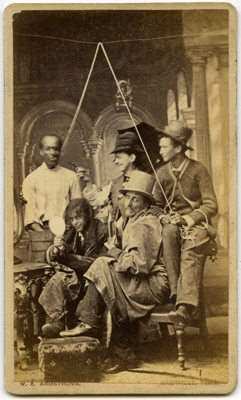 Amateur theatricals, where family or friends would put on their own plays, were a popular form of entertainment in the latter part of the 19th century, and groups would often commemorate their performances with a photograph. In this one, the player act out a lynching, with the African American on the left being hanged by the neck with a rope while one of the party holds a gun to him; even the photographer, Otto Giers, sits in his own photograph at the far right — holding the rope. This seems all in fun, but one must remember the horrific context: in the world of Jim Crow after the end of Reconstruction, even minor infractions of the racial norms that enforced white supremacy could result in the public murder, usually without any legal consequences for the killers. 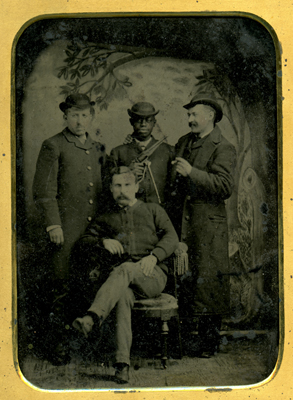 Four men and a revolver

This photograph seems on the surface to describe an opposite social dynamic from the previous one of the mock lynching, because here it is the black man who holds a gun, a large Remington revolver. Outside of Civil War images, it is quite are to find photographs of African Americans holding weapons in this early period. But just as the previous image of the lynching is a visual joke, something done only in “play,” we might well wonder if this is an in-joke image, too, with the reversal of power relations as what is supposed to be funny. The black man with the gun is surrounded by white men, and the man at the right has his arm around his shoulder, grinning, as if in on the joke. 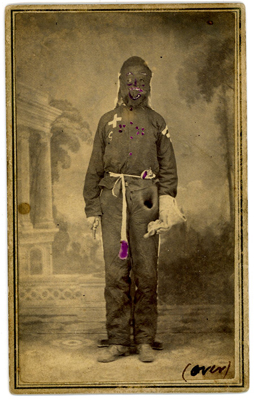 This photograph shows the third Ku Klux Klan outfit and weapons captured on the night of October 31, 1868, after the raid on Huntsville, Alabama. The previous slide shows the other two. The success of the raid itself in breaking up a politidal meeting, that the local white authorities would not cooperate with the Federal troops but instead let the captured KKK men go, shows how easily the KKK could operate with impunity to murder without consequences and terrorize free Blacks so as to reestablish white supremacy after the Civil War. Violence trumped law, and when Reconstruction failed, Jim Crow laws finished the process that terrorist violence had begun: to reestablish a system of racial dominance after a brief period of hope for equality. 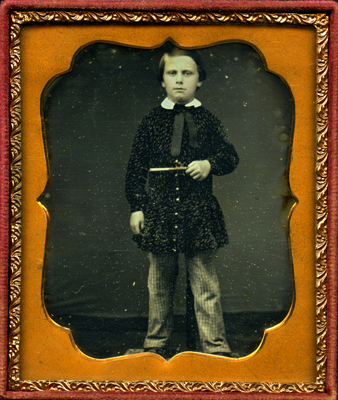 This boy, perhaps 10 years old, holds a toy gun. It is rare to find early photographs of children with guns, and even rarer with toy guns. But in contrast to the previous image, which is unusual in showing a black man with a gun, what is not unusual here is the implied context, one in which white boys would expect to grow up in a world where guns were the mark of manhood and power. For this boy, the power of the gun was assumed as a birthright, if here only in play. But play can make the man. Play is how we learn our roles.