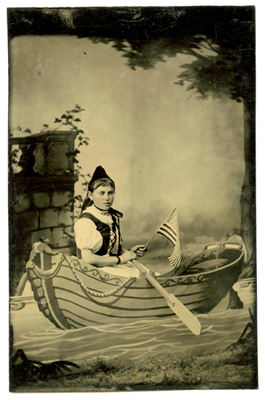 There is something touching about this image of a young woman — just a girl, really — in a traditional, local European costume, waving an American flag as she comes ashore in an elaborate studio prop of a rowboat. It is as if she had rowed herself over from Europe to America. In this naïve hopefulness, she seems embody the most positive aspirations of the waves of millions of immigrants who came from Europe in the latter part of the 19th century. If any viewer can identify what region her costume comes from, we would like to hear from you. 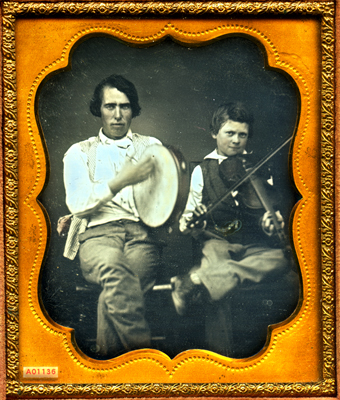 Man and boy with Irish bodhran and fiddle

We can be quite confident that these are an Irish man and boy, possibly (even probably) recent immigrants, because of the very distinct style of drum that the man holds. It is an Irish bodhran, played with a short wooden striker that is twirled by the fingers, and which can just be seen as a blur in the man’s hand. Thousands upon thousands of Irish left Ireland for America during the Potato Famines, around the time this photograph was taken (cir cal 1850). They faced often intense discrimination for their religion, and Protestant Anglo-Saxons often did not accept the Irish as properly “white.” 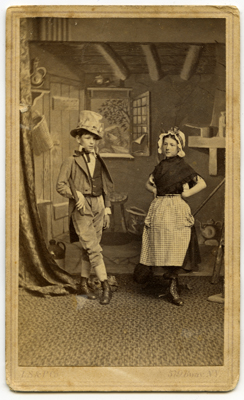 The two chidden, probably no more than 10 years old, seem to be Irish dancers. The pose in costume, in position to perform. The photographer has provided an elaborate painted backdrop of the interior of a rustic cottage to evoke old Ireland, complete with a jug on the floor. This suggests some serious planning, and expense, for this portrait, and these two may have been professional sibling performers. The boy’s costume is particularly distinctive, with a stylized top hat, swallow-tailed jacket, knee breeches, and a shillalagh. 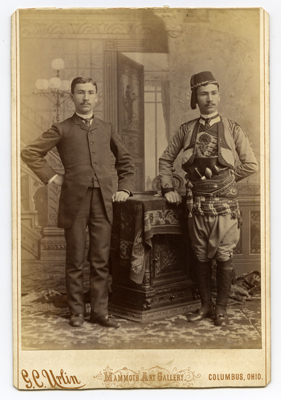 N. A. Morjickian poses here in a double exposure photograph, showing himself in conventional western European clothes on the left and in traditional clothes on the right. In his autobiographical book, life of morjickian , he tells how he was born in Armenia in 1863, came to America, and entered Ohio Wesleyan University in 1882, all of which he obviously took pride in. Does an image like this demonstrate the possibility of integrating an American identity and one from the immigrant’s land of origin, or does it visually underline the schism between the two, and what is the fate of so many immigrants in America: that within a few generations, the former eclipses the latter? 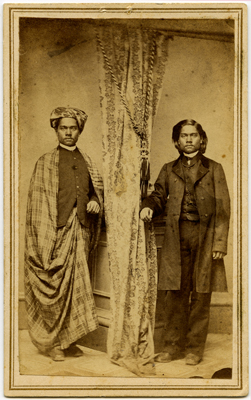 In another double-exposure portrait, Moung Kyau (1841-1883) poses in the traditional clothes of the Karen people from Burma, where he was born, and Western dress. Kyau was not an immigrant but rather a visitor to the United States: he converted to Christianity in Burma, came to America to study the ministry at college, and returned to Burma to do missionary work there. Temporary visitors like Kyau might be treated with considerable interest, both both because their exotic background evoked curiosity and because their conversion to both Christianity and white Western customs confirmed a sense of cultural triumph for whites. Kyau himself seems to give equal weight here to each side of his double identity. 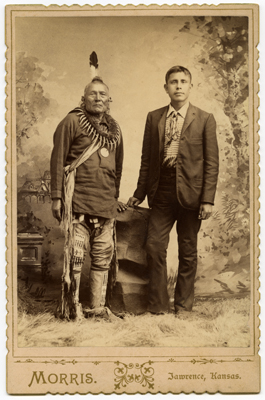 This portrait is a visual echo of the two previous ones, though it is not a double exposure but rather a father and son from the Pawnee tribe. Like the double exposures, it too marks a cultural transition in identity, but here between generations rather than in a single person. Native Americans are precisely that: <i>native</i> to this land. In a nation of immigrants, they are the exception. And yet, in the harsh irony of history, the son has, in a sense, immigrated to “America” (itself a European name for the so-called New World) by adopting Western dress. For many Native Americans, this cultural colonialism was not a choice, it was forced upon them, though that does not seem to be the case here. Despite all the suffering that transition caused to so many, these two men, at least here, seem entirely self-possessed, in stances that mirror one another. 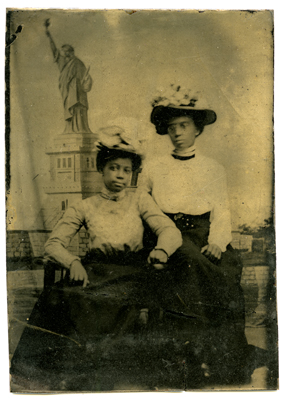 The Statue of Liberty was erected in 1886 in New York’s harbor. With its place close by Ellis Island, a processing center for immigrant arrivals, it became a symbol of the the hope those immigrants brought with them to America. Here, two African American women pose before a photographer’s painted backdrop of the Statue. Blacks have been coming to America for centuries, but for most over that time, their coming was not a free choice — it was brutally coerced. Yet in this image, there is a glint of hope that there might be a new and freely chosen arrival, even for African Americans already long here, in an America more truly open to all comers.