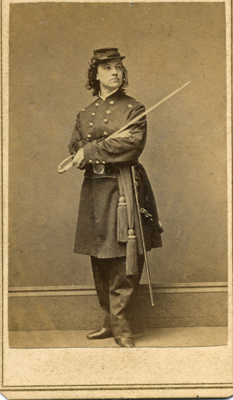 Pauline Cushman (1833-1893) was born Harriet Wood in New Orleans and grew up in Grand Rapids, Michigan. She began a theatrical career in Louisiana in 1851 with “Pauline Cushman” as a stage name. During the Civil War, she became a spy for the Union, supposedly dressing as a man to infiltrate Confederate lines. Cushman narrowly escaped execution once when caught. Granted the honorary rank of major by General James Garfield (later president), after the war she toured and lectured in uniform as “Miss Major Pauline Cushman.” For more on Cushman’s exploits, see Pauline Cushman: Spy of the Cumberland (2006), by William J. Christen; for a contemporary (1865) account, see Life of Pauline Cushman, by F. L. Sarmiento.